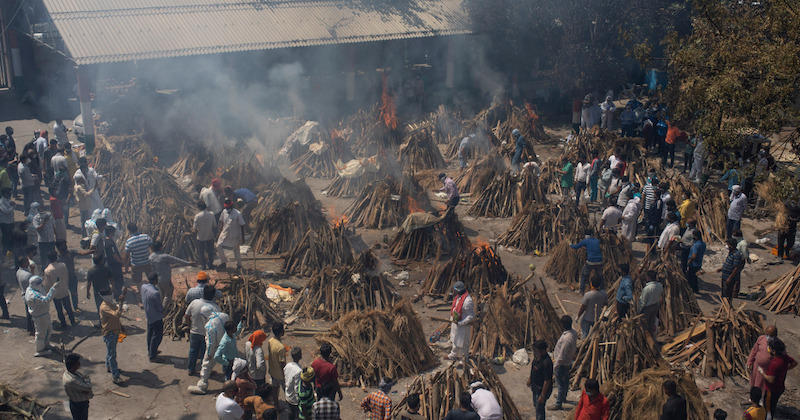 Funeral pyres burning at a ground that has been converted into a crematorium for mass cremation of coronavirus victims in New Delhi.

As the Covid monster has been devastating human lives and national economies unabated across the world, I may infer that there are primarily four pairs of socioeconomic and politico-psychological components which appear to have been inappropriately rationalized between the two in each set. Let’s analyse what has resulted in the ongoing harrowing trend that doesn’t look to ebb in the near future, especially in India.

The causative factors for the present medical agonies are truly bothersome since the people and the governments have not timely prioritized as to what should have been given greater or, at least, equal emphasis between the alternatives, not to mention the urgency and importance formula of Eisenhower’s matrix.

The first set pertains to the “economy versus health” dilemma. We have seen some nations across the globe which have attended to both the components on an equal footing have fared satisfactorily in safeguarding people’s lives as well as their economic interests without severe losses. On the other hand, some European nations, which had prioritized the health services in 2020 and relegated the economy to the next place, have bounced back on the growth track in 2021. Germany in particular extended financial support to the employers during the prolonged and repeated lockdowns so that the jobs are not lost.

There is an intriguing account of Scandinavian countries which have suffered on economic front in the initial months of pandemic whereas Sweden lost comparatively a large number of lives because it didn’t impose lockdowns. Infections and deaths were low in Denmark, Norway and Finland where lockdowns were in force during the same period.

Although India was prompt in the beginning for early nationwide closure, a series of unlocking that followed a few weeks later with a view to protecting livelihoods and carrying out democratic processes like elections hardly brought any relief. Contrarily, such steps proved untimely and hazardous. Also, the costs involved in the second wave of the pandemic have been much higher than the benefits gained by opening up socio-economic and political activities. In the meantime, many celebrities from the fields of arts, business, medicine, etc, have succumbed to the virus – an indigestible irony that the deaths of such successful wealth creators left a huge void leading to permanent losses on the national revenue scene. After all, sound health is the sole energy factor of human capital, without which the fiscal engine cannot move further. One of the main reasons for perpetuation and escalation of poverty in India could be attributed to deficient medical infrastructure.

Coming to “technology versus behaviour” conflict, we feel sad to see some technologically advanced countries doing badly in handling the covid calamity. Their poor performance, we could assess, is more likely because of shortcomings in behavioural response mechanisms as to how sincerely people complied with pandemic rules. The governments of these countries were almost lenient in enforcing Covid-appropriate conduct. Resultantly, there have been extensive damages that ensued from the proliferating infections and unexpected fatalities in 2020.

The Covid realities have, thus, come to make humanity realize that technological advancement alone could not thwart the impending tragedies. Some tech giants like China and Taiwan underscored the importance of rule-bound behaviour by stressing on self-imposed as well as externally enforced disciplinary measures. China took to forcible methods of thrusting isolations and complete shutdowns whereas Taiwan has been successful in garnering people’s acceptance to willingly adhere to pandemic mitigation measures. Both the nations saw significant reduction in Covid positivity.

On the other hand, although the United States has got technological advantage over many other nations, it suffered most from the pandemic mainly due to behavioural lapses. It is only under the new dispensation with political will that Covid-control mandates came to be duly respected. Vaccine planning and administration has added a silver lining to the US’s vigorous efforts to get back to normalcy.

Unfortunately, India is yet to enhance its mettle on both sides, that is – behaviourally and technologically. Prevailing cataclysmic conditions are an eye opener to people and governments that compliance of safety practices would have undeniably alleviated the severity of pandemic pains altough the robust healthcare technologies that are not in place.

Next is “power versus fraternity” puzzle, which, when wrongly prioritized between the two, will take its toll and it is exactly what has been happening in the current medical emergency. Politicization of the democratic processes has been so rampant in India that the people rarely tend to remain united on common goals even in small villages. Civic divisiveness seems to have surpassed fraternal bonds and the underlying motive is unsurprisingly the greed for power.

Read also: India can beat Covid if it changes its behaviour and acts logically

Donald Trump’s America was a pertinent case in point where the open hostilities between Republican and Democrat leaderships had left the nation perplexed on crucial issues, like whether to follow social distancing norms or not or whether to wear masks or not and so on.

The power-hungry Brazilian President Bolsonaro’s regime has also been mired in constant frictions with his political opponents, taking away the nation’s attention from Covid control. Most of the Brazilians experienced an alarming divide among themselves over lockdowns, face masks, expert advice, vaccines and other strategies. Subsequently, the largest South American country with a population of more than 200 million has been living through one of the worst viral devastations in the world.

As the saying goes, the power of love is more powerful than the love of power. Contrary to Mao Zedong’s anti-democratic stance that political power flows through the barrel of the gun, authentic and legitimate authority grows only out of fraternal relations since politics is not a separate entity different from interpersonal connections, in which it is actually embedded.

Lastly, the fact that a sizable chunk of Indian population has been attuned more to unyielding fatalism than to free mind could be discerned by the way it has made an impeding impact on Covid-curbing initiatives. It can also be construed that fatalistic orientation sets the mind to a single direction to wait for supernatural intervention for way out rather than conform to rational solutions for tackling the coronavirus problem.

In spite of known conditions of widespread infections, there were public gatherings, which were often very large in size. These gatherings became – what is known as – “superspreader” events, which exponentially hiked the rate of contaminations in an uncontrollable manner. Fatalistic attitudes posed as barriers to remedial opportunities, which otherwise would have prevented the menace to a large extent.

Israel makes another notable case study where the government faced overwhelming resistance from a section of orthodox Jews on the anti-Covid protocols that were imposed. When the natural gift of freedom that helps explore safety possibilities gets disabled by a deterministic mindset, there would hardly be any choice for a secure life except for blind hope in the face of a rampaging virus. But for the large-scale introduction of vaccinations, Israel would not have wriggled out of its viral travails so fast in recent times.

Disclaimer: The views expressed in the article are the author’s own and not necessarily that of India Sentinels’.