As an otherwise dull and drab November rolls on in 2020 and the memories of India’s latest victim of anti-personnel mine, SFF Commando Nyima Tenzin, fades away, let us take our readers back to another November, 49 years ago – and another heroic saga involving landmines, when the curtains were being raised on a tumultuous chapter of the subcontinent’s history.

The protagonist of our today’s story is Colonel Pavan Nair (retired), whose gallantry is embedded in the larger narrative of Operation Cactus Lily. Few know the name today, but it belongs to a golden chapter of the Indian armed forces and foreign affairs. It was the planned offensive against East Pakistan for the liberation of Bangladesh. Though the war formally started on the evening of December 3, 1971, Indian operations had already commenced in November – in the border areas of East Pakistan. That is where Colonel (then Captain) Nair made his mark. 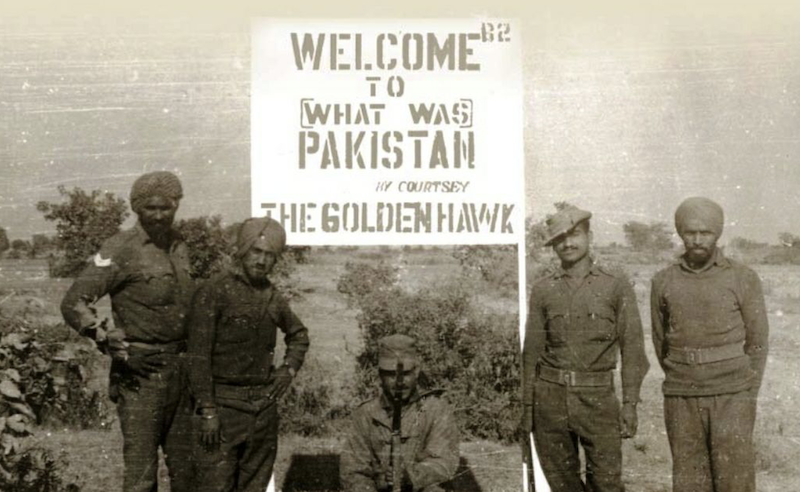 Indian Army soldiers at the border of Bangladesh, in what was East Pakistan.

Colonel Nair was commissioned into the Corps of Engineers, Bombay Sappers, in December 1967. After the Young Officer’s course, He was posted to the new 111 Engineer Regiment, which moved to the East. Did operational works in Sikkim in 1969 in the Lung Thu region, Jelep La sector. After that, he went for the degree engineering course at College of Military Engineering, Pune, which was interrupted in October 1971 as he was posted back to his parent unit.

Capt Nair joined his unit, 111 Engineer Regiment, in location by end October 1971. They were part of the 471 Engineer Brigade, which was providing support to 20 Mountian Division, responsible for the Northwest Sector, extending from Hili in the south of Dinajpur, which was a major garrison town in the north of the sector. The late Major General Lachhman Sing Lehl, VrC, was the GOC of the division. By the time of this operation, Capt Nair held the field rank of captain. 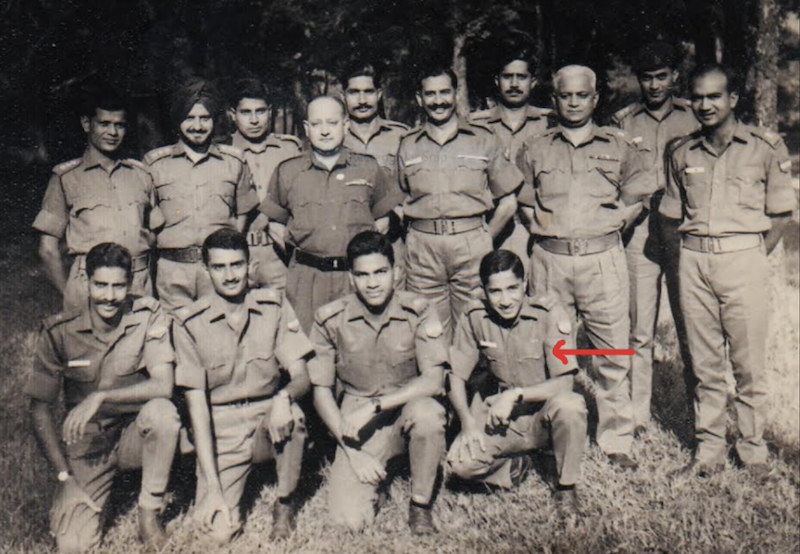 Colonel (then Captain) Pavan Nair (right, front row) in 1969. All the officers in the front row participated in the Bangladesh Liberation War.

Hili was a critical pivot in this sector. It blocked the direct route of ingress for the division, from the Balurghat bulge to the Pakistani lines of communication from Bogura (Bogra), which was a major communications and logistics hub. The Pakistani artillery at Hili had shelled the Indian portion of the town and Balurghat itself in November.

For XXXIII Corps, under whose area of responsibility (AOR) came the northwestern front, 20 Mountain Division along with 71 Brigade, was the only formation in play for Operation Cactus Lily. The 6 Mountain Division was in the Eastern Army Command’s reserve. The rest of its formations were facing China.

The XXXIII Corps had a huge and complex task. Primarily, it was the custodian of our borders and LAC with China in Sikkim and Bhutan, and it was also responsible for the security of the Siliguri Corridor. 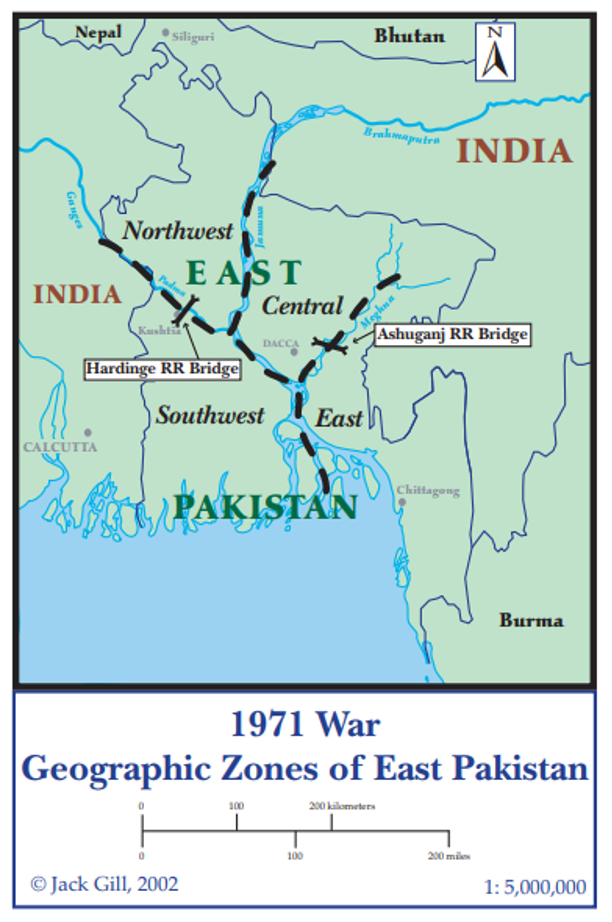 For Operation Cactus Lily, apart from the above tasks, it was to contain Rangpur and Dinajpur in the north, capture Gaibanda and Bogura, and thereafter exploit up to the Ganga.

The tasks given to the formations were as under:

* 340 Mountain Brigade Group would operate in the area south of Dinajpur.
* 202 Brigade would attack Pakistani positions at Hili.
* 66 Brigade would bypass Hili along the Phulbari-Pirganj-Gobindaganj-Bogra axis.
* The 165 brigade was in reserve securing Balurghat and would support either brigade as required.
* An allied (Mitro Bahini) brigade of Mukti Bahini (Sector 7) and BSF would move in on the Malda-Nawabganj-Rajshahi axis.

Such was the enemy

This sector faced formidable Pakistani defences. Lieutenant General Amir Abdullah Khan Niazi, the commander of the Pakistan army’s Eastern Command, chose the fortress defence system, which seemed the logical fallout of the X-Sundarban War Games of 1967. In their Northern Sector (facing Indian Northwestern Sector under XXXIII Corps) there were two designated fortresses: Bogura and Rangpur! The troops deployed on the border was the “Forward line” – this was ahead in of the first line envisioned in the X- Sundarban exercise. The border outposts (BOPs) were located on this line. The two fortresses were located on the second line of defence. This was the forward line envisaged in the X-Sundarban exercises.

In addition to the strong Pakistani “fortresses”, their Army GHQ, Rawalpindi approved in October offensive plans against English Bazar or Balurghat and SSG commando strikes against the Farrakka barrage. All in the Indian 20 Division’s AOR.

Facing the Indians in this sector (Northwest) was the Pakistani 16 Infantry Division under Major General Nazar Hussain Shah. On their maps, this sector was “North”. Probing the BOPs of the Pakistanis had commenced by the middle of November, along with troops of Sector 7 of the Mukti Bahini.

Capt Nair was retained in the 111 Engineer Regiment’s headquarters by the CO, Lieutenant Colonel DR Mani, as the field engineer (FE). The FE’s job was to carry out reconnaissance and design of bridges or crossings or minefields. Also available to the CO for any special task or mission when required. The Indian 340 Mountian Brigade Group under Brigadier JS Bakshi was facing Dinajpur. Opposing them were units of Brigadier Iqbal Mohammed Shafi’s, 23 Infantry Brigade defending the area north of Hili-Chilmari axis. 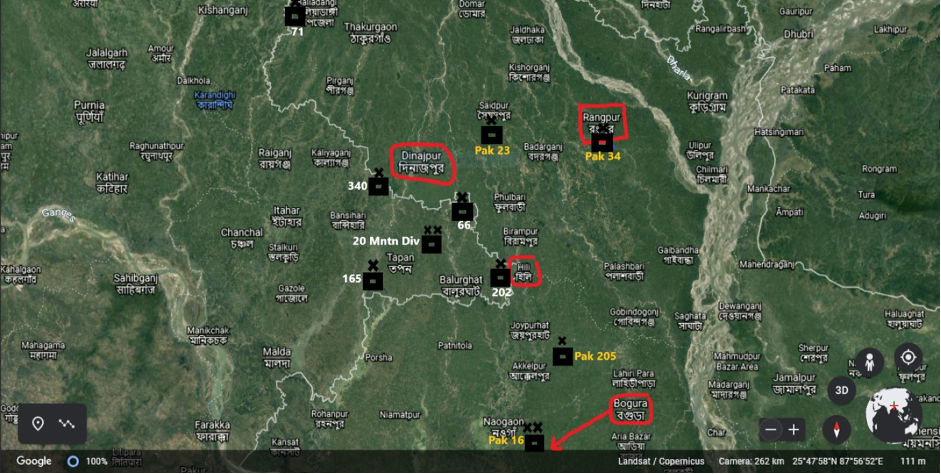 The original, ill-advised plan dictated by Eastern Command, to advance through Hili was given up, after an intense battle on the night of 22-23 November, in which the Indian Army (8 Guards Battalion), going two companies up, suffered huge casualties at Morapara (139 total, 8 officers, 4 JCOs) against the Pakistan’s 4 Frontier Force, for gaining just a foothold. It was now to be outflanked by the 340 Brigade group, from the North, after which the enemy lines of communication in the Pirganj- Gaibanda area were to be cut. This would cut the “fortress” of Bogra off from the North (Dinajpur, Saidpur, Rangpur). Colonel (then Captain) Nair was in the 111 Engineer Regiment’s HQ on the morning of November 23, at the time of the situation report (SitRep) of the Hili battle, that raged the night before. It was a ghastly tale of futile sacrifice. 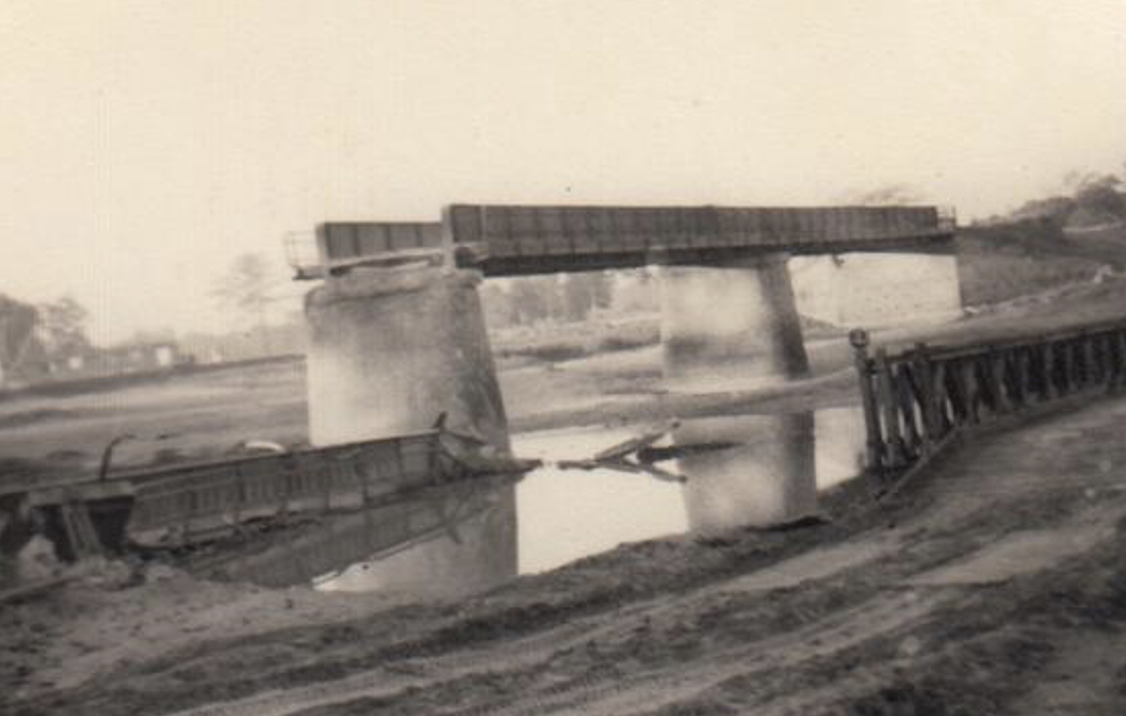 111 Engineers supported 52 Engineers in quickly assembling this bailey bridge after the Pakistanis demolished the main bridge.

4 Madras, a unit of the 340 Brigade Group, was in the thick of the battle since November 12. Having consolidated a base across the international border (IB) at Khanpur, they were spreading out towards Mohonpur and beyond over the Gouripur canal. As per the new plan, 4 Madras was probing the defences in the brigade’s line of advance and had occupied positions astride a narrow canal with Pakistanis of the 26 FF battalion occupying their side of the canal, with a strip of no man's land in between. 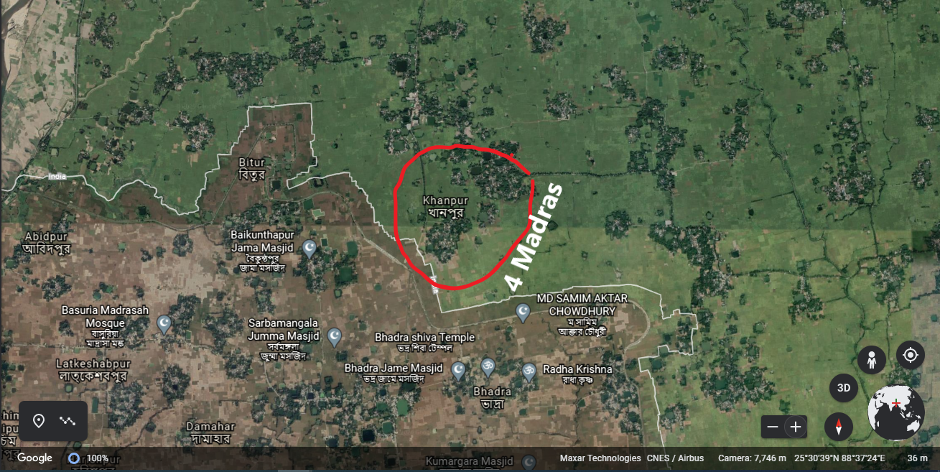 This was in the last week of November. During a night patrol ahead of their defences, one soldier stepped on a mine and had his leg blown off. A minefield or any task involving an advance over ground, with anti-personnel mines underfoot, is an infantry man’s worst nightmare. So 4 Madras stopped on its tracks. They had already shown a high degree of grit of courage over the previous fortnight. They had a Veer Chakra and two Sena Medals to their credit for the action at Khanpur Haat and Ghughudanga, They were taking casualties since the beginning. The report of the minefield went to the engineer brigade. The 111 Engineer Regiment was tasked to check the site and ascertain whether any mine clearance was required.

The CO asked Capt Nair to report to the commanding officer of 4 Madras for further briefing and for personally checking the site of the blast and the type of mines used.

They were all in battle gear and some intermittent firing was taking place. Capt Nair went ahead alone on the recce mission without his sahayak or driver since he was being covered by the forward localities. He was in his normal service uniform, with a soft cap, without any protective gear, not even a helmet. He strapped his sten gun on his back and was equipped with a short prodder and some tools. It was around noon and as he got out of the forward trench on all fours, the Madrasis opened up with a few light machine gun bursts to keep Pakistani heads down.

There was a depression leading to the track on which the mine had exploded. It was about 25 yards away and the track then rose gently towards the canal. The firing continued from both sides. It did not affect him as he was in a defilade area. Possibly the Pakistanis felt something was happening so they opened mortar fire. The shells descended randomly around him (visualize him without a helmet), since it was not an observed barrage. In the meantime he crawled up the track keeping a lookout for any mines. (A mine’s pressure pad is normally visible or there is a disturbance in the soil where it is planted.)

About 10 yards short of the crossing, he saw the crater which was about a foot wide and 8 inches deep. It was in the middle of the track and he could also see a few more mines buried in a single row across the width of the track. Capt Nair approached the mines in crawling position and started removing and disarming them. 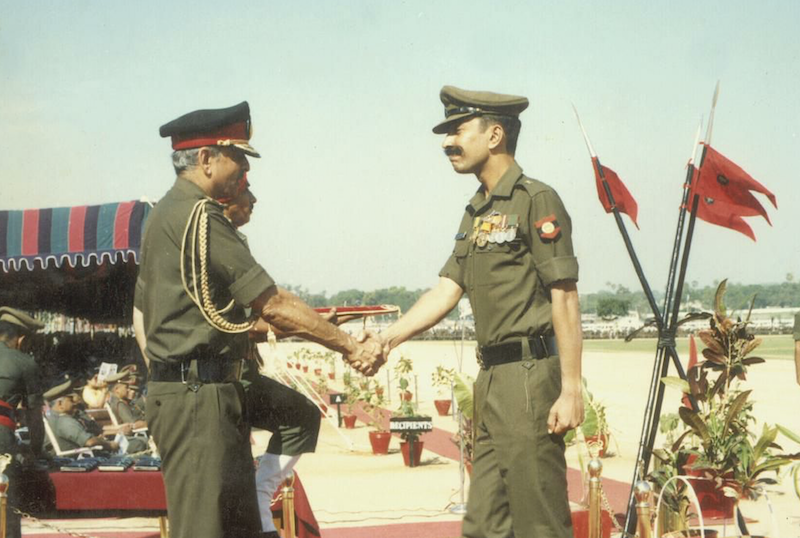 The Pakistani anti-personnel mines could be disarmed by unscrewing the top half which consisted of the pressure pad and firing mechanism and then keeping it separately from the lower half which contains the detonator and explosive.

They had seen these during training and with relative ease, he picked up the four remaining mines, disarmed them and put them in his tool bag. He then looked around the area for other mines but this was the only row laid by the Pakistanis, to avoid a sudden Indian charge across the bridge.

Having completed his dual mission of recce and mine clearance, Capt Nair then safely got back to the 4 Madras forward trenches and reported to the CO, Lt Col Malhotra. The CO saw the mines and was happy to see him back in one piece.

Capt Nair then got back to his own unit. This seemingly minor operation, a recce (reconnaissance) mission converted into an impromptu mine-clearing task, cleared the way for 4 Madras to resume their advance, as part of the 340 Brigade’s operational plans to cut off the North-South road mentioned earlier.

His CO, Lt Col Mani, was pleased and asked him to write an after action report (AAR). The mines were retained in the regiment for training and display. It was a brilliant example of a daring, daylight recce into the enemy’s field of fire and then on personal initiative, turning it into an engineer task under a hail of mortar fire. 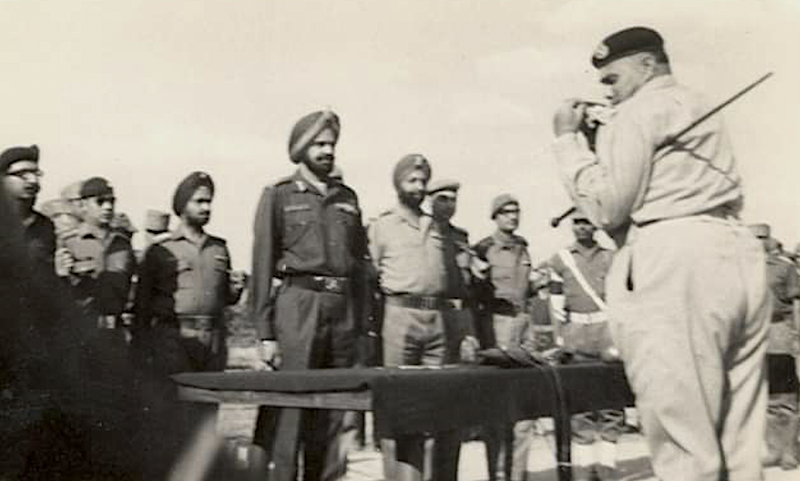 Such was the morning outing of a combat engineer, in the main line of advance.

Such things are not written up or rewards. They are not mentioned in despatches, or even remembered perhaps. So next time you hear of bravery awards and read well written citations, please do remember that for every such tale there are many others which went unnoticed and unsung. Oh passers-by, through the pages of history, do raise a toast to the unsung and unfazed soldier who made our todays possible. 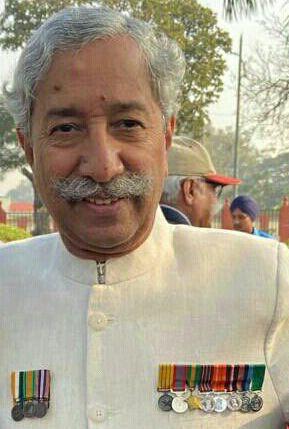