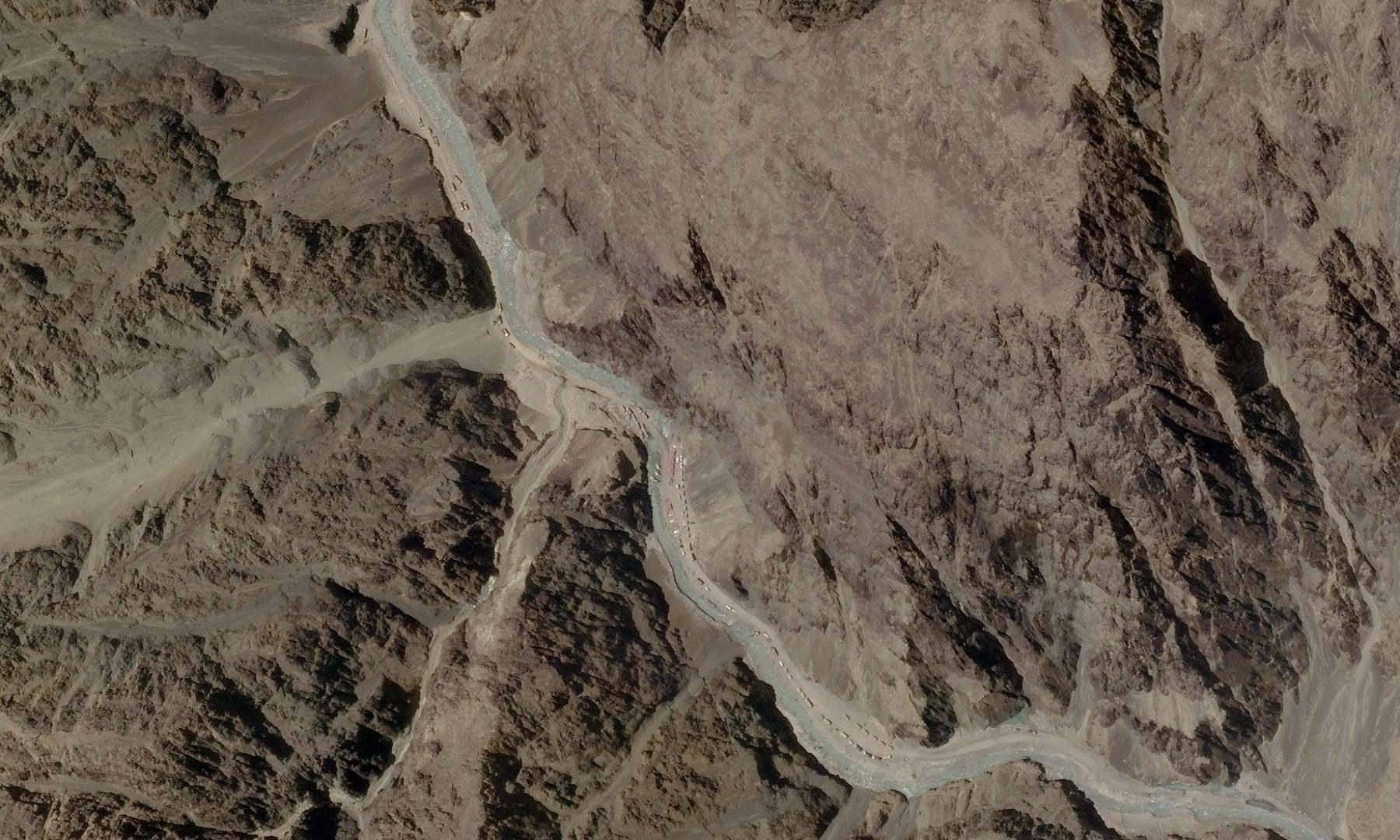 Since the 20 Indian soldiers, including a colonel, were killed in a bloody clash with China’s People’s Liberation Army near the Patrolling Point 14 (PP14) in eastern Ladakh in June, there is one thing the nation wants to know:  the truth about the line of actual control (LAC) – in Ladakh generally, and the Galwan valley in particular. 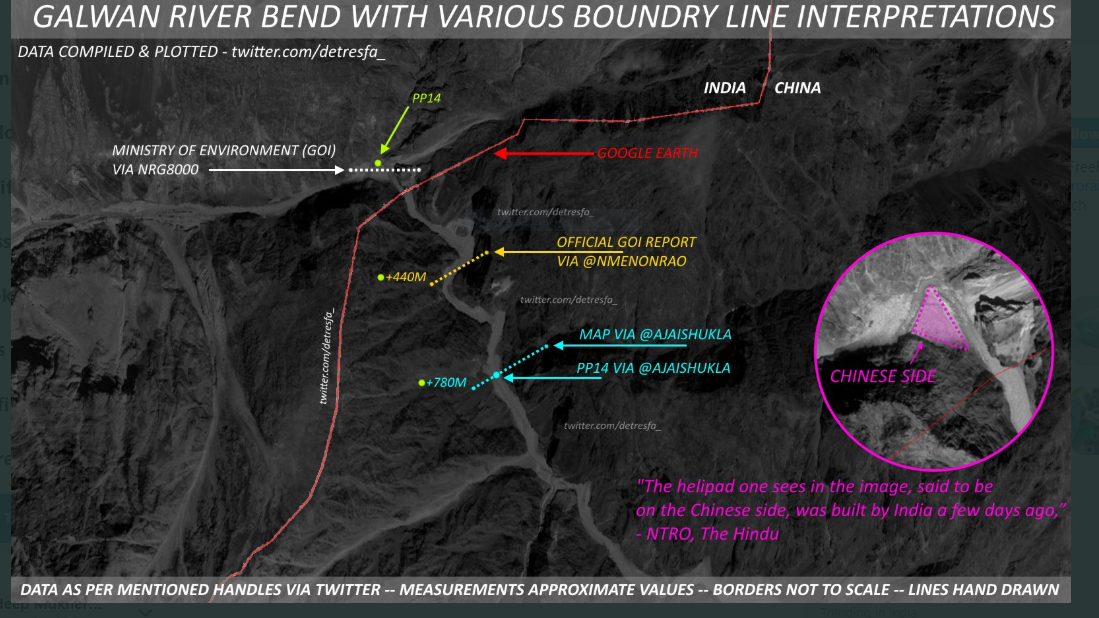 The mystery and the misrepresentations

Is the LAC known? Is it disputed? Is it a matter of perception or confusion, in the Galwan valley? Or was it never in any kind of dispute in this particular area, since 1962? What and where is PP14? Is it bang on the LAC? Did the PLA ambush our troops on the LAC, in a “disputed area” or did they come across the LAC, into “our side”, quite a bit, to hit us? Have we been told the truth by the “sources” claiming to be close to the authorities on this subject or has a deliberate and concerted attempt been made to mislead the Indian public? And most importantly, what exactly are the risks and military consequences for us, arising out of this sudden Chinese move? Has the mainstream media done enough to clear the air? Do they not owe it to the nation? Have sundry “analysts” of commercial satellite images consciously lied to us about where the LAC lies and the Chinese presence “inside” our territory?

The quest for the truth

The genesis of this article lies in the author’s conversation, on Twitter, with a senior defence journalist working with a well-known channel. In response to the author’s views that PP14 (the much talked about Indian Army patrolling point in the Galwan valley) lies well inside the LAC, he wanted to know if any veteran with personal knowledge of this area was willing to go on record to confirm this.

Brigadier RJS Dhillon (retired) was willing to help out. He has led a foot patrol in the Galwan valley, when he was a captain with Ladakh Scouts, in 1979. During that time, he had patrolled the area of the recent conflict and gone till – what was known as – the “limit of Army patrolling” line. And he was willing to go on record, about his experience in this area, what he saw, how far he patrolled and how far ahead lay the LAC, beyond the point till which our troops were allowed to patrol.

“I have been there … I am very clear about that.”

Brig Dhillon says, “Yes, our patrolling point lies well inside the LAC, by over one kilometre, perhaps two. According to Brig Dhillon, the actual LAC alignment in the recent conflict zone is as shown in the map below: 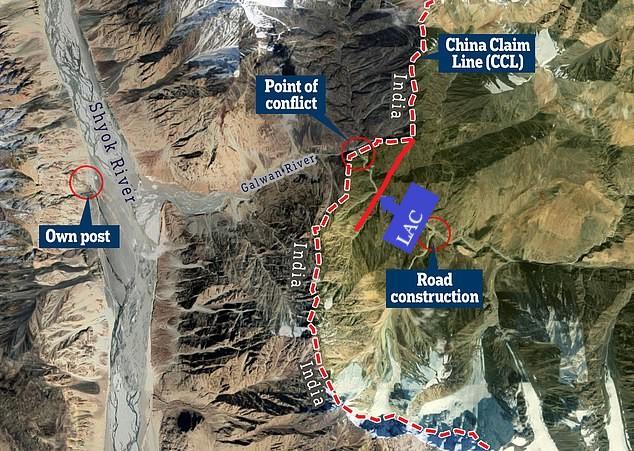 LAC marked according to Brig Dhillon’s directions on image.

According to Brig Dhillon, it is another 5-plus kilometre from the recent clash zone to where the Chinese road ends and new road construction was seen on their side. This means that smooth movement of the PLA’s equipment and wheeled vehicles is possible till very close to the original LAC.

And the PLA pushed the “new LAC”, into our territory, from the original line which was never disputed. China’s original 1960 claim line never ran into areas they are claiming and intruding into now.

China’s 1960 claim line in relation to the Galwan valley.

Brig Dhillon suggests that the bulge in the LAC, at the centre of the frame here, represents the new Chinese realignment of the original line, hitherto undisputed, through encroachment. Check image below: 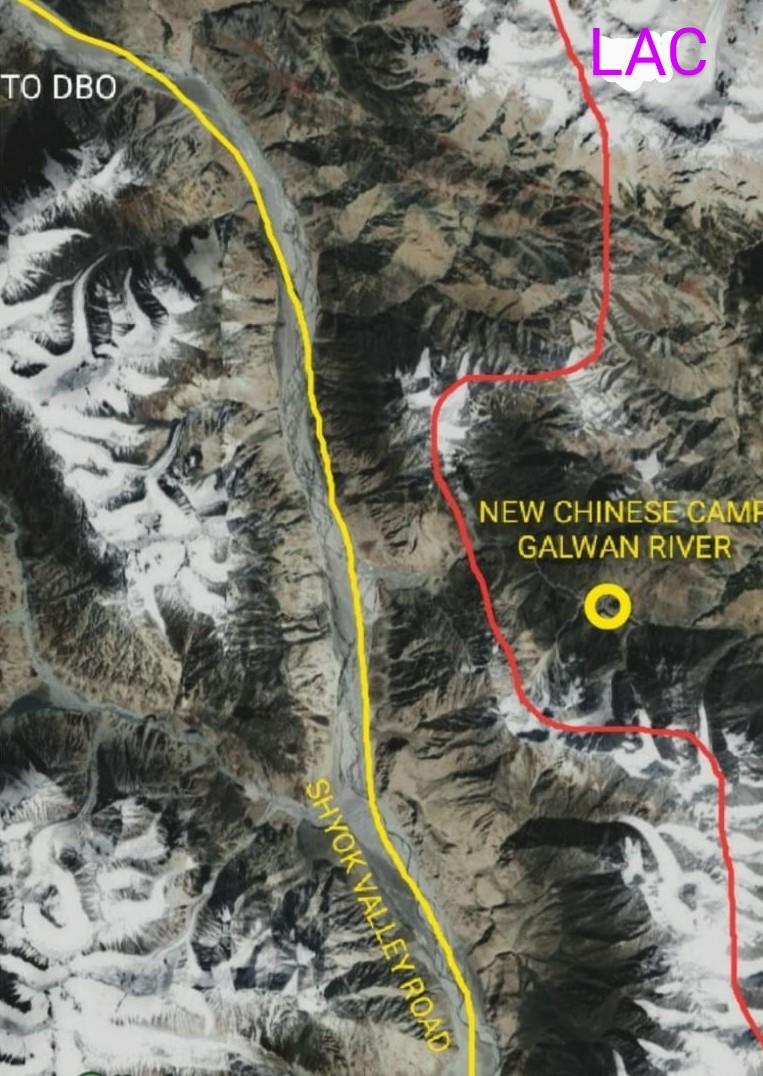 1. Indian Army’s patrolling point (patrolling limit), known as PP14 since the 90s, lies 5 to 6 kilometres from the confluence of Shyok and Galwan rivers. He says this estuary is the ideal strongpoint on our side, for the MLR (main line of resistance), after we have withdrawn  to create the “buffer zone”. The terrain and width of the valley beyond the confluence of these two rivers, make any serious combat operation, suicidal. 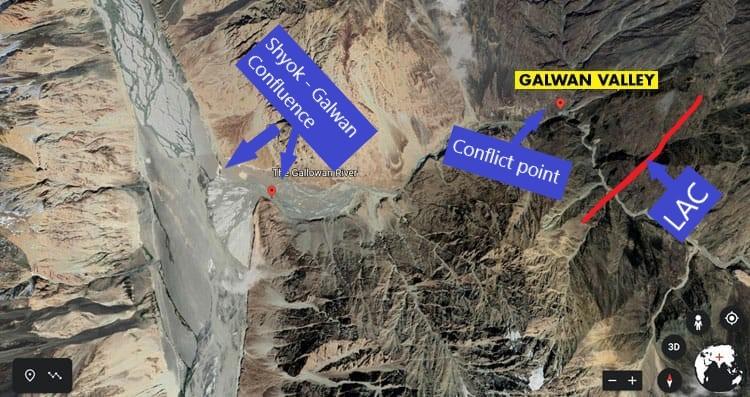 The Galwan estuary in relation to the conflict point and the LAC.

Similarly the PLA would also seek to advance to the estuary for staging any future attacks. For now, Brig Dhillon feels, they have dug trenches, etc, on the ridges they had occupied, before withdrawing from the “buffer zone”. These, he suggests, they will rush in and occupy, the moment there is a flare up next time. However, they can be stymied, if we take up blocking positions now along the estuary, instead of trying to defend the indefensible, narrow, Galwan valley. In that case, they are the ones who will take casualties, beating their heads against our wall.

2.  According to Brig Dhillon, the basic agenda of the PLA, this time around, on the operational and tactical levels are:

a. Tactically gain advantageous terrain and locations for staging further, deeper encroachments/attack, in future. As holding the narrow Galwan valley, would be untenable for the Indian Army, once deprived of the wider ridges near the original LAC and patrol point.

b. However did they really go to all this trouble for minor tactical advantages? Through the meaningless occupation of a few kilometres of the river valley and narrow ridges? Brig Dhillon thinks they had deeper operational intent. Perhaps, a quick grab and hold for the combat isolation of SSN (subsector north) perhaps. That surely makes sense, in view of their determined move to the Y Junction at Rakhi Nullah, in Depsang?

c. Make us commit troops to the ground, to cover the Shyok bend, Aghyam Hundar approach (as a part of mind games).

d. Until some time back, Brig Dhillon says, the PLA post was 15 to 20 kilometres upstream from the Galwan estuary. Recently they have pushed ahead their road infrastructure, close to the original LAC. Now they have the capability to surge ahead rapidly, with staggered, line astern, packets of troops, with integral air-defence cover.

[Editor’s note: We would recommend that you listen to Brig Dhillon’s account straight from the series of recorded sessions between Brig RJS Dhillon and Sandeep Mukherjee, which are embedded at the end of this article. You would get to hear his first-hand description of the entire area – from the confluence of the Shyok and Galwan rivers to the LAC. You would also learn about his tactical assessment of China’s possible intentions, advantages and probable future moves. He also recommends India’s current disadvantages, optimum tactical response and precautions needed.

In view of the sensitivity and controversy around this subject, we have gone on and on around the smallest of details. You would notice that Mukherjee has checked and cross-checked the minutiae with Brig Dhillon. All this was to ensure that he had the time and space to recollect, reconsider and review the smallest of detail.

We thank Brigadier RJS Dhillon on the behalf of our readers for bringing this first-person account to the world.]

Conversation between Brigadier RJS Dhillon and Sandeep Mukherjee below (in 5 parts):

[Disclaimer: Views expressed by Brigadier RJS Dhillon are his own and don’t necessarily reflect the views of India Sentinels.]