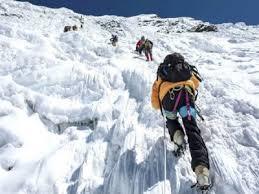 A mountaineering expedition, organised on self request basis by Mr Tapi Mra for which Department of Youth Affairs Arunachal Pradesh gave approval, to Mount Nyegi Kangtsang in East Kameng Distt has reported an incident on Monday, 29 August.

State govt has sought  help from Indian Army's Tezpur based Gajraj Corps in the search and rescue mission.

Indian Army has already mounted the operation. Two ALH and two Cheetah helicopters have been put on standby, these will be used for aerial reconnaissance of the area with one of the team members onboard once the weather clears.

Army’s highly trained and motivated special forces and Arunachal Scouts teams are also being employed for the ground search operations in the challenging terrain of the expedition area.